HOW ALLAH WILL DOMINATE THE WORLD

60:4 '… HATRED hatred forever until you believe in Allah alone" ... we have returned, and to You is the destination.'
'A God Who Hates'

3:85 Only Islam is accepted
The Order to fight until there is no more Fitnah (time of disbelieve in the Oneness of Allah)
'… Allah's Apostle said: "I have been ordered (by Allah) to fight against the people until they testify that none has the right to be worshipped but Allah…"'
5:48 '… For each We have appointed a DIVINE [shari'ah]law'

What is stealth jihad?

54:42 "The (people) rejected all Our Signs (i.e. Qur-ân); but We seized them with such Penalty (as comes) from One Exalted in Power, Able to carry out His Will."

"And fight them until there is no more fitnah and
the religion is all for Allah"
Al Anfaal: 39

"So give respite to the disbelievers.
Deal you gently with them for a while."
at Taariq 86:13-17

BUT 3:151 "Soon shall We cast terror into the hearts of the Unbelievers"

HOW ISLAM WILL DOMINATE THE WORLD

Allah (swt) says in the Qur’aan:

Mušrikūn — One of the greatest forms of kufr (unbelieve) and shirk Arabic: شرك‎ širk (the sin of idolatry, or polytheism, or Paganism, e.g. like "three Gods" of Christianity, i.e. associating partners with Allah)

To stop them: by making Islam "pravail over" 9:33 them (through 9:29 & jizyah i.e. protection poll tax how mafia operates)

And the messenger Muhammad (saw) said:

"Verily Allah has shown me the eastern and western part of the earth, and I saw the authority of my Ummah (nation) dominate ALL that I saw" (Saheeh Muslim, hadeeth #2889)

The only one who would hate for Islam to dominate the world is the Kaafir Mushrik (non-Muslim), as Allah (swt) said, "…even though the Mushrikoon (disbelievers) hate it." Consequently, any "Muslim" who dislikes for the Sharee’ah (Allah's law) to be implemented (out of being afraid to be labelled "extremist" for example) has committed a negation of Eemaan, and thus left the fold of Islam for hating what Allah (swt) has revealed.

Why would the disbelievers and hypocrites ("moderate" Muslims) hate for Islam to be implemented? Simply because they do not wish for their corruption, evil, crime, cheating, oppression, dishonesty, fraud, lies, tyranny, freedom, and deception to come to an end, and for justice (Islam) to prevail.

However, this worldwide domination of Islam which has been promised by Allah (swt) does not necessarily mean that every single person on earth will become Muslim. When we say that Islam will dominate the world, we mean as a political system, as the messenger Muhammad (saw) prophesised that the authority on earth will belong to the Muslims, i.e. the believers will be in power and the Sharee’ah of Islam will be implemented in every corner of the earth.

So how will Islam dominate the world when the majority of people will never accept it?

Indeed, the majority of people on earth will always detest Islam and choose not to live by the Sharee’ah. Allah (swt) says:

"And most of mankind will not believe even if you desire it eagerly." (EMQ Yoosuf, 12:103)

Therefore there are three main ways in which a state or country can become Daar ul-Islam (the domain of Islam):

1. The majority of its citizens embrace Islam and implement the Sharee’ah on their own accord

2. A group of Muslims rise, overthrow the government and implement the Sharee’ah by force (coup)

3. The Islamic state carries out Jihaad as its foreign policy and removes the government

If the Muslims are unable to convince their people (e.g. through peaceful da’wah) to embrace Islam and implement the Sharee’ah, it then becomes an obligation upon them to make hijrah and unite (build their own community and execute the Sharee’ah over themselves) and then rise against the government by force at a later date, regardless of whether they are the majority or the minority. Allah (swt) says:

"Rule by what Allah has revealed (the Qur'aan and Sunnah) and do not follow their vain desires, but be aware of them lest they turn you far away from some of that which Allah has sent down to you..." (EMQ al-Maa-idah, 5:49)

This verse clearly underlines the obligation of implementing the Sharee’ah; but as well as this, Allah (swt) says: "and do not follow their vain desires," meaning, rule by the Sharee’ah even if they (the people) desire something else. The verse is so clear-cut and proves that the Sharee’ah must be implemented by force even if the people do not want it. Furthermore, Allah (swt) also says:

One of the greatest forms of kufr (unbelieve) and shirk (In Islam, shirk (Arabic: شرك‎ širk) is the sin of idolatry or polytheism) today is the implementation of man-made law (democracy); therefore, since man-made law is a form of shirk, one of the only ways of eradicating it from the face of this earth is by Jihaad (fighting). In fact, it is an obligation upon us to fight against the fitnah (kufr and shirk, such as man-made law) until it ceases to exist. Islam has always been spread by the sword, and it will continue to do so.

Unfortunately, nowadays one of the greatest misunderstandings of the divine texts is in reference to the verse, "Laa ikraaha fid-Deen – There is no compulsion in religion..." (EMQ 2:256). This verse has been falsely interpreted (to [end]'… Islamic historian Tabari', '… early Muslim, Mujahid ibn Jabr, this verse was abrogated by Qur'an 9:29' 2:106 [Naskh]) to mean that we cannot force Islam upon the people. However, if we refer to the understanding of the Sahaabah (Companions of Muhammad) we can clearly see that this is not the case at all.

"There is no compulsion in religion" means that people should not be forced to embrace Islam i.e. become Muslim. But this does not mean that we cannot force Islam as a law and order upon the people. The Messenger Muhammad (saw) said:

'I have been ordered to fight mankind until they say, "Laa ilaaha illallah wa anna Muhammadar Rasool-Ullah — There is none worthy of worship EXCEPT Allah and Muhammad (saw) is the messenger of Allah." If they say that, their blood and wealth will be saved from me, except from the right of Islam (the Sharee’ah '… For each We have appointed a divine law' 5:48); and their accountability will be with Allah.' (Musnad al-Imaam Ahmad [ quite simply allah'ss mandate for world war Bukhari Book 8, No. 387 ])

Therefore, the Messenger Muhammad (saw) and the believers were ordered to fight the people until they embrace Islam or live by Islam (and remain a Kaafir). If they become Muslim their blood and wealth will have sanctity, but they will still not be saved "from the right of Islam," meaning that they must still abide by the Sharee’ah (as a law and order). But if they remain non-Muslim, they must at least live by the laws of Islam; either way, the people have a choice of which religion they want to follow, but they have no choice of whether to live by the Sharee’ah or not – this is the meaning of "except from the right of Islam."

It has also been authentically proven that our messenger Muhammad (saw) used to order his companions to invite the disbelievers to Islam. If they refused to embrace it or accept it as a system of governance, then fight against them until Allah’s deen is dominant and implemented:

The messenger Muhammad (saw) said:
"Fight in the name of Allah and in the way of Allah. Fight against those who disbelieve in Allah. Make a holy war, do not embezzle the spoils; do not break your pledge; and do not mutilate (the dead) bodies; do not kill the children. When you meet your enemies who are polytheists, invite them to three courses of action. If they respond to any one of these, you also accept it and withhold yourself from doing them any harm. Invite them to (accept) Islam; if they respond to you, accept it from them and desist from fighting against them. Then invite them to migrate from their lands to the land of Muhaajiroun (migrants) and inform them that, if they do so, they shall have all the privileges and obligations of the Muhaajiroun. If they refuse to migrate, tell them that they will have the status of Bedouin Muslims and will be subjected to the Commands of Allah like other Muslims, but they will not get any share from the spoils of war or Fay’ except when they actually fight with the Muslims (against the disbelievers). If they refuse to accept Islam, demand from them the Jizyah (tax). If they agree to pay, accept it from them and hold off your hands. If they refuse to pay the tax, seek Allah’s help and fight them…" (Saheeh [Most Authentic] Muslim #1731 & Book 19 #4294 & last Medina political jihadi surah 9:29)

"If they refuse to accept Islam, demand from them the Jizyah (tax). If they agree to pay, accept it from them and hold off your hands. If they refuse to pay the tax, seek Allah’s help and fight them." The Jizyah is a small charge or tax which every non-Muslim must pay to the Khaleefah [Q2:30] (leader of the Muslims in a Caliphate). In return, the non-Muslim will be under a covenant, thus making it prohibited for any Muslim to violate his sanctity [p.166 "...this is how the mafia operates"]. This order from the Messenger Muhammad (saw) is very clear; if they refuse to embrace Islam, demand from them the Jizyah i.e. implement the Sharee'ah[key ayah 5:48 '… For each We have appointed a divine law'] over them. If they refuse both of these options, to embrace Islam or live by it as a system of governance, "seek Allah’s help and fight them."

So how will Islam dominate the world? Most likely by force! If the people do not embrace Islam and implement the Sharee'ah on their own accord, it becomes an obligation upon the Muslims to fight and implement Islam. In countries such as Britain and America, their people have clearly rejected to embrace Islam and will never choose to live by the Sharee’ah. Therefore, the only two ways in which these countries can become under the domain of Islam is by the last two options, a group of Muslims rise and overthrow the government, or an Islamic state is established elsewhere and comes to conquer these nations.

"This matter (Islam) will keep spreading as far as the night and day reach, until Allah will not leave a house made of mud or hair, but will make this religion enter it, while bringing might to a mighty person (a Muslim) and humiliation to a disgraced person (who rejects Islam); might with which Allah elevates Islam (and its people), and disgrace with which Allah humiliates disbelief (and its people)." (Musnad al-Imaam Ahmad)

"A small portion of Muslims will rise and conquer the White House." (Musnad al-Imaam Ahmad)

Any person who mocks this concept of Islam dominating the world has one of the attributes of the Munaafiqeen (Hypocrites) and could have committed one of the negations of Islam – disbelieving in the sayings of Allah and his Messenger (saw).

Is there any doubt of the threat we face?
Or is this just some random radical who misrepresents Islam? 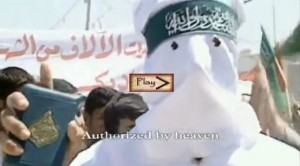 The Plots of the Disbelievers against Islam and Muslims will Backfire

"Or do they intend a plot [kaydan] [against you O Muhammad]? But those who disbelieve are themselves in a plot [makeedoon]" (at Toor 52:42)

"This (is the fact) and surely, Allah weakens the plots [kaydi] of the disbelievers" (al Anfaal 8:18)

"Verily, This (Quran) is the Word that separates. And it is not a thing for amusement. Verily they are but plotting (yakeedoona) a plot [kaydan]. And I am too planning a plan[wakeedu kaydan]. So give respite to the disbelievers. Deal you gently with them for a while." (at Taariq 86:13-17)

… video from: An Open Debate Challenge to Pierre Vogel