No Complusion in Islam

real_islam.pdf (1.8 MB)
"... Muslim apologists often say that there is no compulsion in Islam. The following two verses are enough the show what the reality is.

Verses 2:256-257 make it clear that there is compulsion in Koran-based Islamic religion. 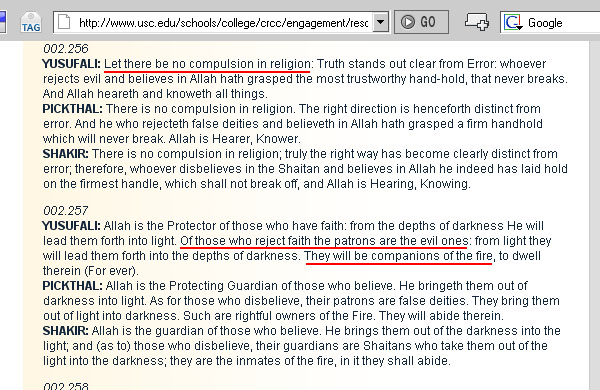 The passage is a warning for believers to stay in line, and is also a warning to disbelievers to not be disbelievers--or else! This harsh policy is consistent with many other verses in the Koran. "Allah" claims he is forgiving and merciful, and then condemns disbelievers to the hellfires to torture them. The Koran orders Muslims to strive against, oppose, and humiliate the non-Muslims, bringing Allah's punishment to them in this world.

Muslims must compel the disbelievers to accept Islam, or accept rule under Islamic Laws, or else be put to death. The idea that Koran-based Islam is without compulsion is not merely false; it is absurd."

Allone the famous "verse of the Sword" 9:5 abrogated the Sura "of no compulsion in Islam" and at least 124 peacfully verses, "Doctrine of Abrogation" (Naskh) of the first half of the Quran written in Medina, when Muhammad was still weak and had ony a few followers and had to woo new converts.

'The Qur'an's tolerant verses: "canceled"' of the astonishing book "The Political Incorrect Guide to Islam (and the Crucades)" by 'New York Times' Beststeller Author Robert Spencer, Director of jihadwatch.org